Analyzing flows of people, drugs and money in the Western Balkans

The Western Balkans is a crossroads for the trafficking of many illicit commodities, and it is a geographical hub for the smuggling of migrants who are trying to enter Western Europe.

While these facts are well known, information on the size of the markets and the potential profits is less evident. And while the Western Balkans has a bad reputation for laundering illicit proceeds, there is not much information on cities and sectors where it is a problem.

This report sheds light on the dark numbers of mixed migrant flows through the Western Balkans, the prices that they pay to be smuggled, as well as the cost of drugs in the region. To do this, it uses an approach pioneered in two previous Global Initiative Against Transnational Organized Crime (GI-TOC) reports on organized crime in the Western Balkans, namely pinpointing and looking at what is going on in selected hotspots especially high-volume entry and exit routes through which migrants are smuggled, and key drug trafficking nodes. Focusing on illicit activity in these hotspots provides a close-up look at the drivers and enablers of organized crime. At the same time, an analysis of these hotspots in a regional context gives an indication of the volume of illicit trade and the potential profits being made.

After looking at the amounts of money being made in these hotspots and showing where and how the smuggling of migrants and drugs is taking place, the report looks at a third flow – money. The third section of the report explains how money laundering works in the region both in terms of cleaning small amounts in the informal economy as well as bigger volumes generated by serious organized crime and large-scale corruption. It identifies sectors and industries as well as particular hotpots in the Western Balkans that are particularly vulnerable to money laundering. 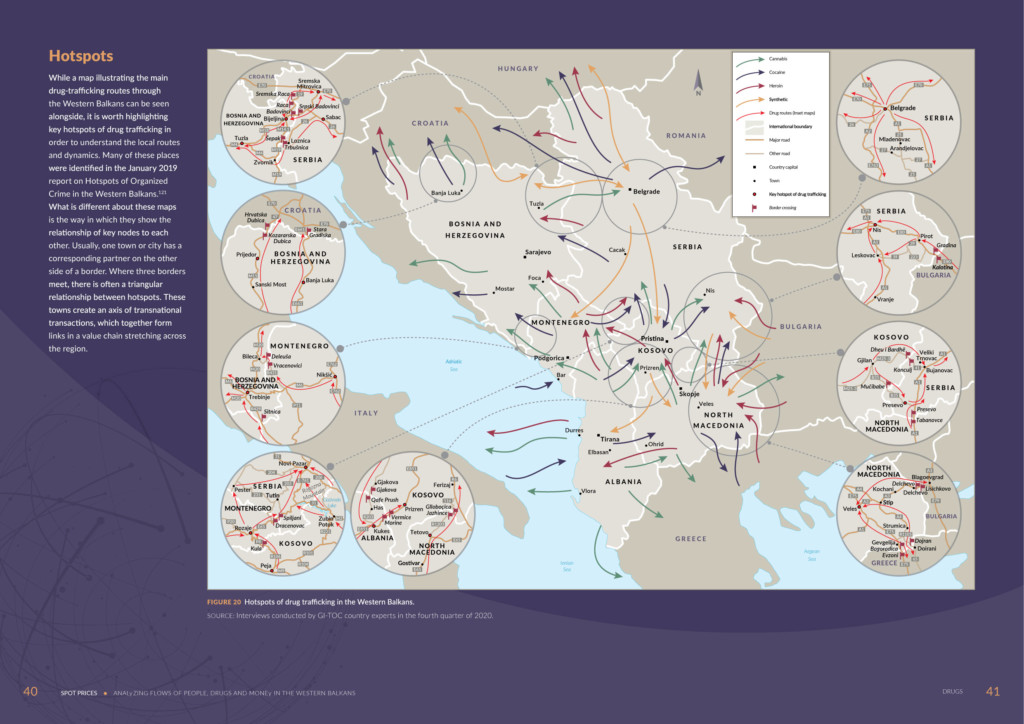 This report contains a wealth of information which was gathered (despite the COVID-19 pandemic) through field research and interviews carried out with current and former law enforcement officials, investigative journalists, researchers, local officials, as well as migrants, drug users, and representatives of civil society in the hotspots. It also draws on secondary sources and official government information. To make this information more user-friendly, a number of maps and graphics have been specially made for this report.

We hope that this report can lead to a greater understanding of illicit economies in the Western Balkans in order to take more effective measures to reduce the incentives and profits of organized crime.

Annex: Calculating the size of the human smuggling market

Hotspots of Organized Crime in the Western Balkans

Hotspots of Organized Crime in the Western Balkans

Making a killing: What assassinations reveal about the Montenegrin drug war