Fighting corruption during the coronavirus

Oil smuggling is a lucrative financial source for organized crime and terrorist groups and an example of how demand for cheaper oil creates opportunities for criminals and terrorists in Turkey. The country’s high taxes, its proximity to neighboring countries with cheaper oil prices, difficult controlling its borders and harbors,[i] and endemic corruption are the main factors that lead to oil smuggling in Turkey. In 2012, for example, the price of petroleum, $2.72 per liter, in Turkey was the second most expensive petroleum in the world. Turkey’s eastern neighbor, Iran, the price of petroleum was the second cheapest at $0.10 per liter. In southern neighbors Iraq and Syria, the price was $0.78 and $0.96 per liter, respectively.[ii]

The number of vehicles registered each year and the amount of oil consumed have increased disproportionately, enticing criminals and terrorists to fill the gap with smuggled oil. In 2004, oil consumption in Turkey increased 24 percent, while the number of vehicles registered increased 70 percent. Turkey generated between 20 percent and 25 percent of its tax revenue from the purchase of oil products in 2004.[iii] The total value of its oil tax revenue was 51 percent of the country’s private consumption taxes in 2013.[iv]

The revenue lose was almost $2 billion in 2004[v] and $5 billion in 2017.[vi] Each year, 2.5 million tons of smuggled oil has been transferred to Turkey, which equates to one-fifth of the oil consumed in the entire country. According to a study by Turkey’s Parliamentary Oil Smuggling Examination Board, 7.8 million tons of smuggled oil entered to Turkey in the last two years.[vii] Of that amount, only 18,000 tons were seized,[viii] which means that law enforcement officials only seized every one liter for every 434 liters of smuggled oil.

For years, Turkish officials have not given the problem of oil smuggling the attention it deserves. Annual reports from the Anti-Smuggling and Organized Crime Department of the Turkish National Police dating back to the 1990s said nothing about oil smuggling. Similarly, only limited information on the topic has been divulged since the early 2000s. The attitude of the former and current governments is largely to blame. Although oil smuggling is a vast operation, the government has shown limited concern. Pervasive corruption is a key reason. People in Turkey believe that prominent bureaucrats and politicians are linked to the oil smuggling operations, and therefore they avoid expressing strong opposition to the smuggling.

Smuggled oil finds its way into Turkey through various means. While a huge amount of oil has been smuggled through sea routes by ships, some oil has been smuggled from neighboring countries that have cheaper oil prices.[ix] In 2014, for example, most of the smuggled oil came from three cities—Izmir, Kocaeli, and Mersin—where criminals brought in the oil through sea routes. Oil smuggled from cities located along the Syrian border confirmed the impact of the Syrian war. Most of the smuggled Syrian oil came from the border city Hatay, followed closely by border cities Gaziantep, Adana, and Sanliurfa.[x]

The number of oil smuggling investigations and arrests steadily increased between 2011 and 2014, with the police arresting an average of 5,000 oil smugglers each year. Between 2014 and 2015, however, the seizure of smuggled oil plummeted as a result of graft scandals in late 2013. After the December 17-25 graft scandals uncovered corrupt linkages among four ministers and the son of President Recep Tayyip Erdogan, the government retaliated by firing and jailing entire anti-smuggling units comprised of nearly 8,000 well-educated and highly experienced police officers.

The government’s attitude toward the police has created weaknesses and incompetency in efforts to counter oil smuggling. While the number of oil smuggling investigations decreased 84 percent in 2015 compared with 2014, the number of oil smugglers arrested decreased 79 percent.[xiii] The Anti-Smuggling and Organized Crime Department has not released a report on seizures in 2016; however, it should not be difficult to predict that fewer seizures were made, given the reduced and feeble capacity of anti-smuggling police officers in the wake of the graft scandals.

Smuggling operations in Turkey include small-, medium- and large-volume undertakings, with corruption playing a pivotal role in each type. Corruption, for example, enables small-scale smugglers to cross the country’s borders, provides opportunities for medium-scale smugglers to bribe customs officials, and large-scale smugglers to forge counterfeit documents used for tax evasion.

Small-scale oil smuggling activity typically occurs along the Turkish border in cities located in Iran, Iraq, and Syria. The smugglers operate in small groups with familial and kinship relations providing opportunities for the illegal activity. In a case in 2012, it was revealed that smugglers used 400 moles to transport oil from Iran to Turkey. Also, it was discovered that the smugglers had built two short pipelines to transfer oil from Iran to Turkey.[xiv] In another case, border officials detected a three-kilometer impromptu pipeline between Turkey and Iran.[xv]

According to a law enforcement official who worked in an eastern Turkish city located on Iranian border, villagers use moles to smuggle oil and cigarettes from villages in the borderlands. Each mole carries at least 140 liters of oil. The oil is stockpiled in oil tanks in the villages and then is carried to city centers by trucks. It takes two hours for moles to fetch the oil. Sometimes moles are forced to carry oil three times in one night. Turkish and Iranian border officials know about the ongoing smuggling and do not interfere with the activity in exchange for paying a small bribe to each mole. Some oil smugglers earn almost $8,000 in a month.[xvi]

Large-volume oil-smuggling operations have not been studied. What is known about them is based mostly on anecdotal information that underlines the involvement of media bosses and wealthy businessmen. In one rare investigation, the prosecutor indicted and charged a criminal group consisting of a media boss and 46 suspects with importing oil from Russia and Belarus—neither of which is a member of the European Union Customs Union (EUCU)—but showing the source as the United Kingdom. The counterfeit documents were used to evade paying taxes on the oil. According to the indictment, the group evaded $6.3 million in taxes on a total of 56 oil transfers.[xviii] In another investigation, the police found that one of the big oil companies in Turkey smuggled oil with counterfeit documents. The company opened a front company in one of the offshore islands and showed this company as a source to buy oil. Then the oil company transferred a vast amount of oil from countries with cheaper prices and used fake documentation to show that the oil was transferred from EUCU states.[xix] 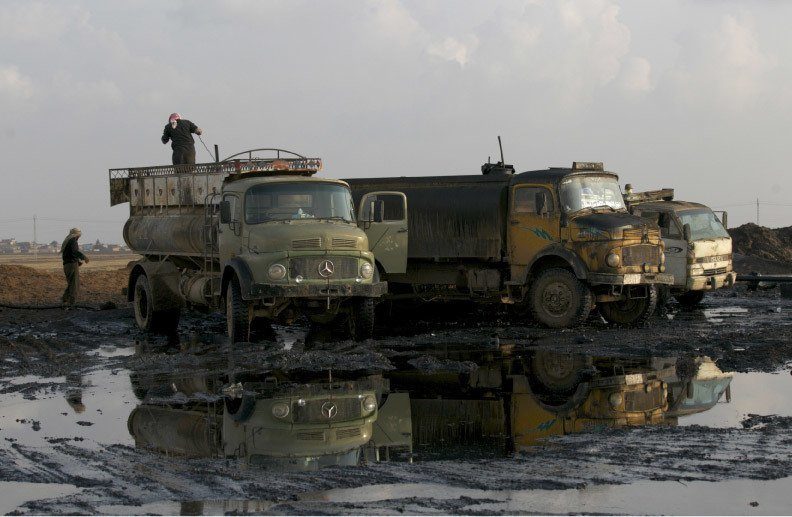 A man stands on a truck near oil fields in Syria’s northeastern Qamshli province. The Islamic State group controls six out of Syria’s 10 oil fields, which is helping to fuel its lucrative oil-smuggling business. Photo: Reuters

Substantial revenue from the lucrative oil fields that ISIS has confiscated in Iraq and Syria has turned ISIS into the wealthiest terrorist organization in the world.[xx] When ISIS invaded territories in both countries, it confiscated 3 million barrels of petroleum in storage tanks. This is a significant long-term source of revenue for ISIS.[xxi] In earlier periods, ISIS was able to sell 47,000 barrels daily in conjunction with smugglers.[xxii] According to another source, the amount was almost 100,000 barrels a day,[xxiii] which generated $500 million in oil revenue in December 2015.[xxiv] ISIS usually sells this petroleum to Syrian intermediaries who locate smugglers[xxv] and offer bribes of about $5,000 at checkpoints in exchange for transporting the oil outside of ISIS-controlled territory. Under this arrangement, Kurdish oil smugglers can earn up to $300,000 a month.[xxvi]

ISIS is selling barrels of petroleum at prices below market value. Despite this lower price, ISIS makes between $850,000 and $1.5 million.[xxvii] ISIS mostly sells oil to neighboring countries such as Jordan, Iran, Syria, and Turkey. Using three different routes, vast amounts of oil are shipped from ISIS-controlled regions to Turkey.[xxviii] High-level Russian[xxix] and Iranian[xxx] officials allege that Turkey is a customer for ISIS’s petroleum.

The increase in oil seizures in Turkish cities along the border with Syria has confirmed the extensive movement of Syrian petroleum to Turkey. A comparison of oil seizures from the two years before and the two years after the Syrian civil war that began in 2011 indicates a 900% increase after the war.[xxxi]

The PKK actively has become involved in oil smuggling from Syria, Iran, and Iraq to Turkey. For example, the organization has taxed oil smugglers at border crossings. At eight so-called customs points on the Iranian side of the border, the PKK receives taxes from smugglers.[xxxii]

To sum up, an extensive oil-smuggling operation exists along Turkey’s borders with Iran, Iraq, and Syria. Criminals and terrorists fill the vacuums and smuggle oil to meet demand for cheaper oil. Under these circumstances, it likely will be difficult to tackle oil smuggling as long as government officials avoid developing effective counter-strategies, corruption flourishes, and the demand for cheaper oil continue unabated. This situation creates opportunities for criminals to operate and for the PKK and ISIS terrorists to generate revenue for their operations.

[xxii] “The Islamic State in Iraq and the Levant and the Al-Nusrah Front for the People of the Levant: report and recommendations submitted pursuant to resolution 2170 (2014),” United Nations Security Council Syrian Report, http://www.securitycouncilreport.org/atf/cf/%7B65BFCF9B-6D27-4E9C-8CD3-

[xxiii] B. Foucan and A. Albayrak, “Islamic State Funds Push Into Syria and Iraq With Labyrinthine Oil-Smuggling Operation,” The Wall Street Journal, http://www.wsj.com/articles/islamic-state-funds-push-into-syria-and-iraq-with-labyrinthine-oil-smuggling-operation-1410826325. (accessed on September 2, 2016).

Dr. Cengiz has international field experience where he has delivered capacity building and training assistance to international partners in the Middle East, Asia, and Europe. He also has been involved in the research projects for the Brookings Institute, European Union, and various U.S. agencies.

Dr. Cengiz regularly publishes books, articles and Op-eds on Syrian conflict, terrorism, transnational crime, and corruption issues in the Middle East. His recent 2019 book, “The Illicit Economy in Turkey: How Criminals, Terrorists, and the Syrian Conflict Fuel Underground Economies,” analyzes the role of criminals, money launderers, and corrupt politicians and discusses the involvement of ISIS and al-Qaida-affiliated groups in illicit economy.

His blogs on crime and terrorism have been published by Vocal Europe, Small Wars Journal, and The Global Initiative against Transnational Organized Crime.