Arms Trafficking: Closing the Net A Test Case for Prosecution under the U.S. Law on Arms Brokering

by Kathi Austin, Fund for Peace

Arms Trafficking in Syria: A Case of the Biter Getting Bitten

Illicit Trafficking and Instability in Mali: Past, present and future

subject of this report, was granted permission by the federal court in Los Angeles to leave the U.S. pending sentencing in July for conviction on wire fraud charges. This ruling reversed previous restrictions that limited Soghanalian’s movements to the Central District of California and, at one time, required him to wear an electronic monitoring device. Despite inquiries, The Fund for Peace has been unable to ascertain why a convicted felon, awaiting sentencing in the U.S. and facing an international arrest warrant from Peru, was allowed to travel overseas, providing an opportunity to escape justice and destroy evidence on other possible charges. Available public records do not provide any explanation for the decision of the court.

Should Soghanalian not return to the U.S. for his July sentencing, the U.S. should immediately seek his extradition and solicit mutual legal cooperation and assistance from foreign governments for prosecution for violation of the U.S. arms brokering law. The Fund for Peace report helps establish probable cause for his arrest. Action on this case is especially urgent in light of the recent arrest of the Peruvian former intelligence chief, Vladimiro Montesinos, who, among other crimes, was reportedly involved in the same arms trafficking scandal as Soghanalian, and his accomplice, Charles Acelor.

While the U.S. government, in cooperation with Peruvian authorities, has spent considerable resources in its successful attempt to locate and apprehend Montesinos, it has yet to take appropriate action in bringing to justice those persons falling under its own legal jurisdiction. Evidence from the Montesinos investigation is likely to shed light on the case against Soghanalian. This would be a test case for the U.S. government to enforce its own U.S. law on gunrunners. 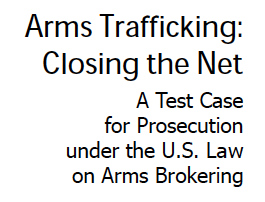