About 230 million people, or 5 per cent of the world’s adult population, are estimated to have used an illicit drug at least once in 2010. Problem drug users number about 27 million, which is 0.6 per cent of the world adult population. Throughout the world, illicit drug use appears to be generally stable, though it continues to be rising in several developing countries. Heroin, cocaine and other drugs kill around 0.2 million people each year, shattering families and bringing misery to thousands of other people. Illicit drugs undermine economic and social development and contribute to crime, instability, insecurity and the spread of HIV.

Global opium production amounted to 7,000 tons in 2011. That is more than a fifth less than the peak of 2007 but an increase from the low level of 2010, the year in which a plant disease destroyed almost half of the opium harvest in Afghanistan, which continues to be the world’s biggest producer. The total area under coca bush cultivation in the world fell by 18 per cent between 2007 and 2010 and by 33 per cent since 2000. Efforts to reduce cultivation and production of the main plant-based problem drugs have, however, been offset by rising levels of synthetic drug production, including significant increases in the production and consumption of psychoactive substances that are not under international control.

Although Member States are to be commended for their hard work in dealing with the drug problem, often with the support of UNODC, the figures sketched above indicate the scale of the challenge. The response by UNODC has been twofold: first, develop an integrated approach; and second, focus on prevention, treatment, alternative development and the promotion of fundamental human rights. 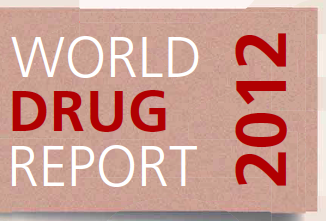 Synthetic cannabis: a safe way to “spice” up your life?

Estimating IFFs from Drug Trafficking and other forms of Organized Crime