The Negative Impact of the War on Drugs on Public Health: the hidden hepatitis C epidemic

Hepatitis C is a highly prevalent chronic viral infection which poses major public health, economic and social crises, particularly in low and middle income countries. The global hepatitis C epidemic has been described by the World Health Organization as a ‘viral time bomb’, yet continues to receive little attention. Access to preventative services is far too low, while diagnosis and treatment are prohibitively expensive and remain inaccessible for most people in need. Public awareness and political will with regard to hepatitis C are also too low, and national hepatitis surveillance is often non-existent.

Instead of investing in effective prevention and treatment programmes to achieve the required coverage, governments continue to waste billions of dollars each year on arresting and punishing drug users – a gross misallocation of limited resources that could be more efficiently used for public health and preventive approaches. At the same time, repressive drug policies have fuelled the stigmatisation, discrimination and mass incarceration of people who use drugs. As a result, there are very few countries that have reported significant declines in new infections of hepatitis C among this population. This failure of governments to prevent and control hepatitis disease has great significance for future costs to health and welfare budgets in many countries.

In 2012 the Global Commission on Drug Policy released a report that outlined how the ‘war on drugs’ is driving the HIV epidemic among people who use drugs. The present report focuses on hepatitis C as it represents another massive and deadly epidemic for this population. It provides a brief overview of the hepatitis C virus, before exploring how the ‘war on drugs’ and repressive drug policies are failing to drive transmission down.

The silence about the harms of repressive drug policies has been broken – they are ineffective, violate basic human rights, generate violence, and expose individuals and communities to unnecessary risks. Hepatitis C is one of these harms – yet it is both preventable and curable when public health is the focus of the drug response. Now is the time to reform. 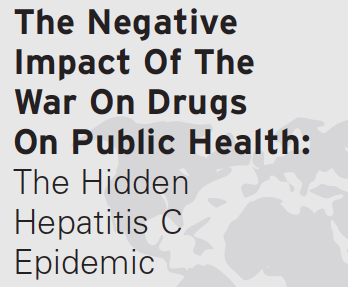 The Negative Impact of Drug Control on Public Health: the global crisis of unavoidable pain

Methamphetamine: Fact vs Fiction and Lessons from the Crack Hysteria