Gangs, violence and the role of women and girls: Cape Town

The upcoming United Nations General Assembly Special Session on the World Drug Problem (UNGASS) in 2016 is an unprecedented
opportunity to review and re-direct national drug control policies and the future of the global drug control regime. As diplomats sit down to rethink international and domestic drug policy, they would do well to recall the mandate of the United Nations, not least to ensure security, human rights and development. Health is the thread that runs through all three of these aspirations, and the UN global drug control regime has the ‘health and welfare of mankind’ as its ultimate goal. But overwhelming evidence points to not just the failure of the regime to attain its stated goals but also the horrific unintended consequences of punitive and prohibitionist laws and policies.

A new and improved global drug control regime is needed that better protects the health and safety of individuals and communities around the world. Harsh measures grounded in repressive ideologies must be replaced by more humane and effective policies shaped by scientific evidence, public health principles and human rights standards. This is the only way to simultaneously reduce drug-related death, disease and suffering and the violence, crime, corruption and illicit markets associated with ineffective prohibitionist policies. The fiscal implications of the policies we advocate, it must be stressed, pale in comparison to the direct costs and indirect consequences generated by the current regime.

The Global Commission proposes five pathways to improve the global drug policy regime. After putting people´s health and safety at the center of the picture, governments are urged to ensure access to essential medicines and pain control. The Commissioners call for an end to the criminalization and incarceration of users together with targeted prevention, harm reduction and treatment strategies for dependent users. In order to reduce drug related harms and undermine the power and profits of organized crime, the Commission recommends that governments regulate drug markets and adapt their enforcement strategies to target the most violent and disruptive criminal groups rather than punish low level players. The Global Commission’s proposals are complementary
and comprehensive. They call on governments to rethink the problem, do what can and should be done immediately, and not to shy away from the transformative potential of responsible regulation. 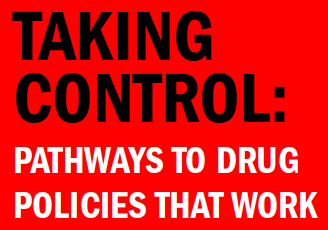 Pathways to Drug Policies that Work,

The drug legalization debate: The case for an enforcement approach