Strategies for a Globalised World

Many cities across the globe are being undermined by chronic insecurity and violence, which are often connected to crime challenges originating beyond their municipal borders. Analyses across ten cities, undertaken for the purposes of developing this framework, identified several key illicit flows that were relatively common and had a direct link to city safety, including trafficking of persons and drugs, illicit financial flows, firearms and counterfeit goods.

The impact of global illicit flows on city security and how they exacerbate risk factors for crime and violence at community level is often not well understood. Enforcement actions against those at local level engaged in illicit “retail” trade, for want of a better term, has until recently been considered the only way to address crime and violence, but experience shows that an over-reliance on policing strategies may in fact exacerbate and displace the problems rather than mitigating the drivers undermining safety. Instead, there is an urgent need to move towards more holistic, integrated strategies and interventions that offer a wider range of responses, and recognise the need to act locally in addition to deploying efforts at national or international level. 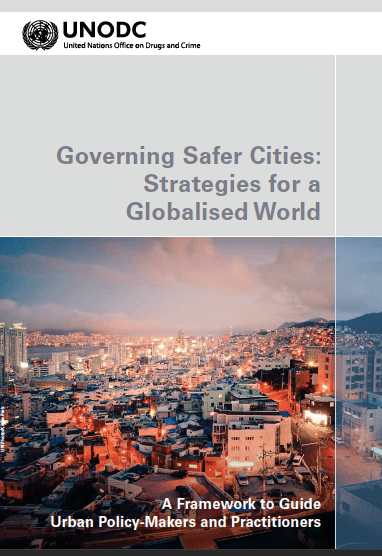 In “Governing Safer Cities: Strategies for a Globalised World“, authored by Global Initiative Director, Mark Shaw, and Simon Howell from the University of Cape Town, for the UNODC, the authors propose a a guide for practitioners and urban planning professionals that applies strategic approach to urban security should be based on an in-depth understanding of how a wider set of localised risk factors interact with illicit external flows to create conditions of insecurity, including different forms of ‘criminal governance’ that seek to subvert city and state governance.

Based on evidence from ten global cities, and an expert group of more than 30 global experts, the guide concludes that responses, while context specific, must seek to reverse such processes, re-establishing legitimate governance, reducing inequality and promoting inclusion and individual and community resilience.

The framework underscores that insecurity in many cities increasingly lies at the intersection between external or global flows (threats) and their interface with local urban dynamics (vulnerabilities). This interplay may also exacerbate risk factors at city or community level. Without informed analysis a strategic response is unlikely or may be aimed at the wrong objectives.

The framework provides a process to guide policy makers to a better understanding of how to approach to addressing the intersection of global threats and local dynamics, including by identifying nodes or levers that could promote change; and seek out what builds resilience.

For more information on the Global Initiative’s work on urban security and transnational threats, see our Safer Cities Project.

The Negative Impact of Drug Control on Public Health: the global crisis of unavoidable pain