The Nexus of Conflict and Illicit Drug Trafficking: Syria and the Wider Region

The conflict in Syria has raged for over five years, creating massive destruction and human misery. Over 5 million people have fled Syria and over 6.6 million are internally displaced. Much of the suffering and conflict is being maintained by actors turning to a variety of illicit funding, and increasingly trafficking in the drug captagon. Unlike many other drugs the primary destination markets for captagon is countries in the Arab peninsula and increasingly Syria and the Syrian diaspora. Captagon has emerged as a conflict drug helping to sustain the war. For other drugs, particularly, Afghan sourced heroin, the instability and conflict has had the opposite effect of moving trajectories away from Turkey and Syria and north through the Black sea. Many long-established drug trafficking networks prefer a more stable environment to that found in Syria and neighboring countries.

Within Syria people living under extreme conditions often turn to drug use, while soldiers from all parties to the conflict can use the drugs as combat stimulants. 6 million Syrian migrants and refugees in neighboring countries are an at risk community to drug use and acting as mules to pay for their travel to European countries. Though, the challenge of illicit drug trafficking and production in Syria is not new it has become a reliable war drug for many actors. International interest by law enforcement in drug trafficking is often limited by domestic political concerns. Yet there are long term public health and rule of law consequences for development and law enforcement actors that unless directly recognised now and responses planned for in a post-conflict Syria will lead to more suffering and instability in the region.

This report looks at the current impact of drug trafficking and conflict within Syria and neighboring countries, discussing trajectories, development and organised crime response to the challenge and opportunity conflict provides. 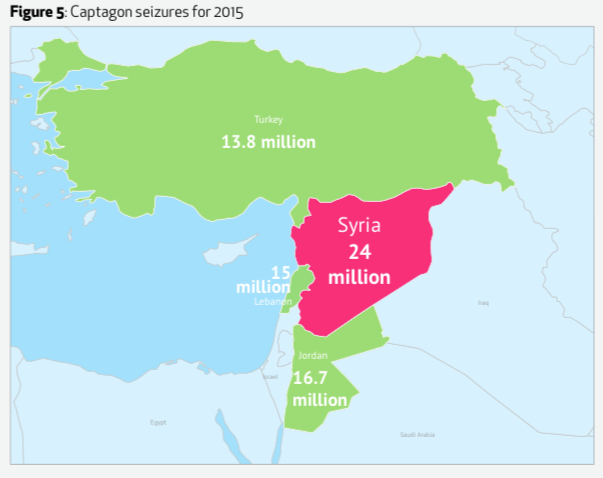