In Niger, anti-smuggling efforts risk trading one crisis for another 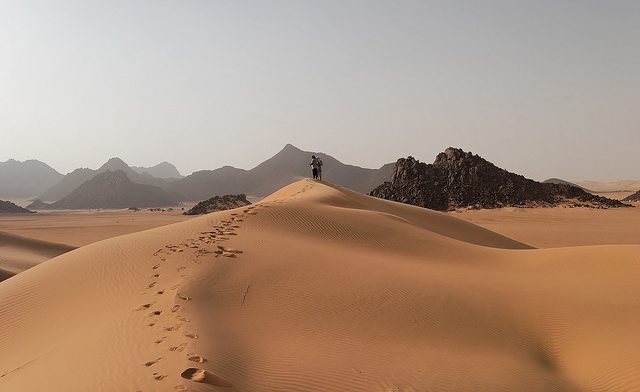 The migrant smuggling industry has brought jobs, stability, and wealth to northern Niger. Which is why countering it is fraught with risk.

With unprecedented flows of irregular migrants from Africa to Europe, EU policymakers are eager to work with governments in source and transit countries to stem migrant arrivals from the continent. Having seen its controversial €6 billion ($6.4 billion) agreement with Turkey prove effective in dramatically reducing migrant arrivals via Turkey (for now), the EU is seeking to buy similar cooperation from African governments.

In October 2015, the EU launched the multi-billion Emergency Trust Fund for Africa to “tackle the root causes” of irregular migration, with a particular emphasis on the Sahel and Lake Chad Region, North Africa, and the Horn of Africa. Additionally, the EU has negotiated bilateral compacts with countries such as Mali, Niger, Nigeria, Senegal and Ethiopia as part of its Migration Partnership Framework, which lists “breaking the business model of smugglers” and enhanced “cooperation on returns and readmission of irregular migrants” among its goals.

Yet within this web of frameworks and agreements, Libya, the principle point of departure for maritime crossings from Africa via the Central Mediterranean, remains a policy black hole. Insecurity and a lack of a central government preclude meaningful partnerships, so instead European policymakers have turned their attention to Libya’s southern neighbour, Niger, which has seen hundreds of thousands of irregular migrants from throughout West Africa pass through its territory on their way to Libya since 2012.

EU engagement in Niger has included a pilot project to convince migrants to stop their journeys, encouraging Niger to pass a law against migrant smuggling, a range of capacity-building projects for law enforcement authorities and the judiciary, and increased cooperation in “the fight against smugglers”.

As recently as last month, EU officials were openly touting the success of these efforts, citing IOM figures to claim that the number of migrants transiting through Niger to Libya had dropped from 70,000 in May to 1,500 in November, in part due to EU programs as well as arrests of migrant smugglers and confiscation of vehicles by Nigerien authorities.

One should be cautious, however, in placing too much faith in these numbers, let alone ascribing causality to particular interventions. As IOM concedes, the dip could be the result of smugglers changing routes in order to avoid detection at the two monitoring outposts of Séguédine and Arlit. Similarly, past decreases in migrant flows have often proved ephemeral.

Furthermore, recent arrests of smugglers are by no means the first of their kind, and if previous crackdowns are any indication, the motivations behind them will have been far from pure. My own interviews in 2014 and 2015 in Agadez, Niger’s preeminent smuggling hub, indicate that crackdowns on smugglers were almost always symbolic and often only targeted low-level operatives who had run afoul of local authorities, failed to pay the necessary bribes, or upset higher level counterparts who sought to use law enforcement to settle scores or wipe out competition.

When I texted one smuggler in Agadez last week, he told me that smugglers are being more discrete, but that migrant convoys are still leaving for Libya with regularity. “[The government] can’t close things down definitively…The more they complicate it, the more profit,” he said, alluding to a phenomenon that Tuesday Reitano and I encountered in several key smuggling hubs across Africa, the Middle East, and Europe in our research for our recent book Migrant, Refugee, Smuggler, Saviour. That is, absent meaningful measures to offer alternatives to irregular migration, increased border patrol and law enforcement do little more than force migrants to pay greater sums and take greater risks, while also increasing the profit margins of the smugglers.

The danger of destabilisation

In the case of northern Niger, however, haphazardly designed anti-smuggling efforts come with an even greater danger: destabilising one of the few pockets of stability in a volatile region. Aside from the promise of money from Europe, the reality is that the Nigerien government has few incentives to crack down on migrant smuggling, in part because doing so is fraught with political and security risks.

In northern Niger, migrant smuggling is part of a broader political economy that is thoroughly enmeshed within formal and informal political and security structures. In fact, Niger’s anti-corruption agency found that state security forces in the region would not be able to function if they did not take bribes paid by smugglers, and would otherwise be unable to purchase basic necessities such as fuel, spare parts for vehicles and food.

Government officials in Agadez have also conceded that everyone from drivers, fixers, landlords, shop owners, currency dealers, and even local law enforcement are profiting from the economic boom. “Many are eating off these migrants,” Ahmed Koussa, an assistant to the mayor of Agadez, told the New York Times. Abdourahamane Moussa, deputy-secretary general for the regional government in Agadez, struck a similar tone speaking to the Wall Street Journal. “Migrants are buying things, consuming our goods, animating our economy,” he said. “People here are benefitting…How can we stop it?”

Far from being an ancillary activity taking place on the margins of northern Niger’s economy, the migrant smuggling industry has become an integral part of entire communities, many of which have long derived their livelihoods from facilitating the movement of goods and people. As a result, it is worth asking to what extent curbing irregular migration through Niger might work against the long-term goals of development and stability in the Sahel.

If we acknowledge that the migrant smuggling industry has been a tremendous boon – not just for high-level smugglers, but for entire populations that otherwise struggle to find opportunities amid economic uncertainty and regional instability – one might go so far as to say that migrant smuggling revenues are actually a force for stability.

European policymakers must therefore consider the extent to which anti-migrant smuggling efforts might upset the delicate security equilibrium that the Nigerien government has worked hard to maintain amid external shocks from neighbouring Libya, Mali, and Nigeria, and an array of domestic pressures.

After smuggling, then what?

In a recent report I co-authored for the Institute for Security Studies and Global Initiative against Transnational Organized Crime, I argued that European policymakers need to incorporate a more nuanced understanding of how anti-migrant smuggling efforts might impact local security dynamics into their policies.

Elements within Niger’s coup-prone armed forces, for example, stand to lose a source of revenue if they are no longer able to collect money from migrant convoys. As a result, the Nigerien government might have no choice but to reallocate its already tight budget in order to adequately fund its restive security forces, thus diverting finances that could otherwise be used for health, education, and economic development.

A migrant-driven economic boom followed by a policy-induced economic bust is hardly a recipe for stability. It is imperative, therefore, that European policymakers recognise that any success in stemming the flow of migrants through Niger must be coupled with credible economic alternatives for those who stand to lose. Otherwise, Europe is courting another crisis in the Sahel.

Peter Tinti is an independent journalist and Senior Research Fellow with the Global Initiative against Transnational Organized Crime. He is the co-author, with Tuesday Reitano, of Migrant, Refugee, Smuggler, Saviour.

This article has been written by Global Initiative Senior Researcher Peter Tinti and was originally published by African Arguments on 13 January 2017. Available here.

Whose crime is it anyway?

Whose crime is it anyway? Organized crime and international stabilization efforts in Mali

North-West passage: The resurgence of maritime irregular migration to the Canary Islands