The Global Initiative is very proud to announce that one of our Senior Advisers, Mr Ugljesa Ugi Zvekic has received the annual Transparency Award 2017. 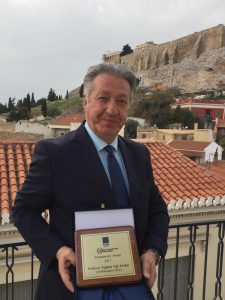 As former permanent representative of the Republic of Serbia to the UN, a visiting professor of the Law School University of Rome, the School of Governance, LUISS in Rome and the Law School at the University of Belgrade, Ugi contributes with years of invaluable experience in muiltilateral work within the United Nations Secretariat and other international organisations to the work of the Global Initiative and is part of our core Secretariat.

Professor Uglješa Ugi Zvekić (Ambassador Ret.), former permanent representative of the Republic of Serbia to the UN and other international organizations in Geneva, gave a lecture on Thursday, February 23, 2017 at 19.00 at the conference hall of the EPLO premises in Plaka, Athens under the subject “Corruption and Organized Crime: Threats in South Eastern Europe”.

The event was organized by the Academy of Transparency & Human Rights of the European Public Law Organization (EPLO).

Professor Zvekić spoke about the international concern of the increasing trend in organized crime, organized corruption and terrorism which calls for a global reaction and cooperation and analysed the causes of these phenomena and their interlinks.

The professor stressed out the importance of the reinforcement of moral values, the implementation of educational actions and the role of International Organizations as means of effective dealing with these phenomena.

Regarding South Eastern Europe and the special circumstances of the region, Professor Zvekić presented the forms of organized crime and corruption and the sensitive sectors with emphasis on each country.

The lecture was completed with a thorough presentation of the international actions and cooperation required to encounter these phenomena in the region of South Eastern Europe.

Analyzing Organized Crime - What to Watch in 2014

Analyzing Organized Crime – What to Watch in 2014