Deterring the Influence of Organized Crime

The Global Initiative against Transnational Organized Crime, together with International IDEA, launched two joint research reports in a series on “Protecting Politics: Deterring the Influence of Organized Crime on  Public Service Delivery” in our
Geneva Headquarters on 4 October 2016. 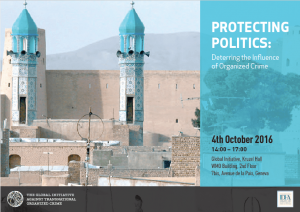 Background
The nexus between organised crime and politics is a growing global concern that affects new as well as established democracies, as it erodes the very principles of democratic governance such as rule of law, equal exercise of citizenship rights, responsiveness and transparency. Political corruption is a valuable tool for illicit networks to advance their businesses.

In spite of this, the global comparative knowledge of the relations between organised crime and political actors remains limited, particularly policy-oriented analysis about their nature and dynamics. International IDEA’s Protecting Politics project and Money in Politics initiative aim to address this gap. As part of these projects, in 2012–14 IDEA conducted research and policy analysis on the modalities in which both illicit networks and political actors use to engage with one another, as well as the loopholes in legal and regulatory frameworks that enable those relationships. These efforts resulted in the publication of regional reports in the Baltic States, Latin America and West Africa.

As a follow up to these previous regional reports, IDEA and its partners, the Clingendael Institute and the Global Initiative against Transnational Organized Crime (based in The Hague and Geneva respectively), conducted further thematic research regarding specific areas of democratic governance particularly affected by organised crime, focusing on the topics of elections, political parties, local democracy and service delivery.

About the reports
Protecting Politics: Deterring the Influence of Organized Crime on Public Service Delivery: Service delivery sits at the foundation of the citizen-state relationship, and is therefore implicit in this social contract as the state promises both freedom from fear and freedom from want. It is therefore essential in state-building as a measure of government capacity and legitimacy. Situations of state weakness due to lack of authority, capacity or legitimacy, competing forms of governance, such as organised crime groups, can emerge to provide these services. This report builds on an introduction to the concepts of service delivery and organised crime by examining the motives and possibilities of organised crime to act as a service provider. Entry points for organised crime to take on this are discussed in terms of state capacity and legitimacy to provide various public goods, highlighting that the relationship between organised crime and the state is not passive nor one directional. The report then illustrates the role of state formation and political transition in creating space for organised groups to capture service delivery, and provides the characteristics of the capture of different types of services. This is concluded with case studies from Afghanistan, Somalia and Colombia.

Protecting Politics: Deterring the Influence of Organized Crime on Local Democracy: Local democracy encompasses formal and informal institutions at the subnational level that respond to citizens’ needs. At the centre of local democratic practice, are open governments, which provide people with space for participation, promote deliberation and focus on public interests. But local state fragility undermines people’s capacity to experience democracy within their communities. Organised crime increasingly exploits these weaknesses in order to protect its illicit businesses, as political corruption is an ideal avenue preferred by organised criminals. This report looks at the interlinkages between organised crime networks and political actors at the local level. It also analyses some policy responses that have—intentionally and unintentionally—affected those relations, paying special attention to decentralisation policies. Three case studies from Afghanistan, Colombia and Niger illustrate how illicit networks relate to local levels of government and decentralisation processes. The cases also describe some state policy responses that have created or closed opportunities for organised crime to engage in political corruption at the local level.

Find out more about the reports here.

The panel started with a welcome introduction by Mark Shaw and Cataline Uribe, as well as included: Mark Shaw (Global Initiative, Director) who chaired the discussion, an introduction to the research by Nathalie Ebead (Head of Democracy Assessment, Analysis and Advisory at International IDEA), a presentation by Cataline Uribe (International IDEA, Series Editor and Author of Local Democracy Paper), a presentation by Tuesday Reitano (Global Initiative, Author of the Service Delivery Paper), and concluding remarks by Sebastian Brack (Kofi Annan Foundation, Political Advisor and Manager of the Electoral Integrity Initiative).

Crime, Violence, and Politics: Drug Trafficking and Counternarcotics Policies in Mali and Guinea

How pandemic measures have eroded democracy in the Western Balkans