The World Drug Report 2014 is aimed at helping the international community to address the toll that illicit drug production,
trafficking and consumption continues to take on all our societies, by providing a global overview and analysis of developments, based on the best available data.

The report is being published at a key moment in the global debate on the world drug problem. A high-level review of the implementation of the Political Declaration and Plan of Action on International Cooperation towards an Integrated and Balanced Strategy to Counter the World Drug Problem was conducted in March 2014 in Vienna by the Commission on Narcotic Drugs, followed by a regular session of the Commission. These meetings provided contributions to a special session of the General Assembly on the world drug problem, which will be held in 2016. The high-level review was more than a stocktaking exercise; it provided a much-needed forum for an open, inclusive dialogue, involving not just Governments but also the scientific community, civil society and young people, on the most effective ways to counter the world drug problem.

Efforts to date to implement the Political Declaration and Plan of Action have resulted in some considerable successes, including sustainable reductions in illicit drug cultivation through alternative development initiatives and welcome improvements in treatment delivery. There have also undeniably been serious setbacks, however, not least the surge in opium cultivation and production in Afghanistan, the violence associated with the illicit drug trade, and the growing instability of regions, including West and East Africa, that are already vulnerable to trafficking and to rising levels of local production and use of illicit drugs.

It is clear from the discussions at the high-level review, and from the findings of the present report, that there are no simple answers to these problems. Nevertheless, the lessons we have learned are valuable and we have attained a shared understanding of a way forward. 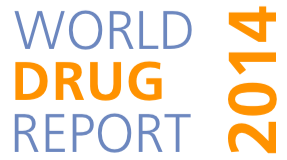