Since the 2011 so-called ‘Jasmine Revolution’ in Tunisia and the 2011 fall of Colonel Gaddafi in Libya, the two countries have experienced an unprecedented security deterioration. The spectacular attacks that took place in Tunisia against the Bardo museum, the Presidential Guard, the Sousse tourist resort and, more recently, the border city of Ben Guerdane are only the visible part of the iceberg and hardly hide the daily deterioration of human security in both countries. How might these two countries be able to address the root causes of their post-revolutionary instability and prevent further destabilisation of the buffer border regions in the near future?

For decades, Tunisia and Libya have had a long-established and mutually profitable interdependence. Despite some diplomatic skirmishes over the years, the two countries remained closely intertwined. In particular, the population from the border regions, due to their long marginalisation from central economic flows and power, had to create the conditions for their own economic survival. In that context, the informal cross-border economy has developed significantly, with tolerance from central states and local control by community leaders.

While the cross-border exchanges used to represent up to $1 billion a year and to provide a living to 10% of the Tunisian population, they have been significantly impacted by the outcomes of the revolutions. Beyond the decrease of economic exchanges during the last five years, regional turmoil has also led new ‘Islamo-gangsterism’ networks to enter these cross-border dynamics and has also led to community networks losing their historic de facto monopoly over formal and informal trade. This new situation is highlighted by a significant increase in terrorist attacks and other security incidents in both countries. While the international community is still treating Tunisia as a successful example of democratic transition, the situation appears to be more complex and nuanced. The economic deterioration that has followed the ‘Jasmine Revolution’ and the Libyan collapse, together with a new and disorganised religious vitality, have deeply changed the country’s real nature. With allegedly 3,000 Tunisian fighters in Libya, clandestine training camps close to the border and numerous arms depots, regional instability is now at its peak.

While Libya is still struggling with endemic and grass-roots instability, security chaos and political disorders, successive post-revolutionary governments in Tunisia have tried to tackle the cross-border security challenges; however, they have met with little success. The lack of means available, together with socio-economic distress, have significantly hampered the efficiency of the measures taken. The unholy coalition between Islamist-oriented Ennahda and the secular Nidaa Tounes party, the multiplication of protests (5,000 in 2015), the growing insecurity (more than 30 terrorist attacks since the revolution) and the forthcoming local elections in March 2017 are just a few of the numerous challenges the Tunisian authorities have to deal with.

For decades, successive Tunisian governments also put a strong emphasis on repressive options rather than addressing the (economic) root causes of instability. This has considerably increased tensions within Tunisian society and deepened the gap between youth, who are the main victims of state suspicion, and official representatives.

To prevent any further destabilisation in the region, and considering also the high volatility in Libya that obstructs the implementation of any ambitious and comprehensive national stabilisation programme, this Clingendael report emphasises the need to continue focusing on the understanding of local needs and the enhancing of bottom-up initiatives able to address the multifaceted causes of instability. It chiefly identifies the current insecurity as being a result of both economic and security dynamics at regional level and highlights the possible entry points for local and international stakeholders to enhance stability. Most importantly, it insists on positive outputs to be expected in transitioning from ‘top-down’ strategies to ‘bottom-up’ approaches in order to directly support municipalities and local communities in their efforts to tackle the cross-border challenges. Considering their positive input on local stability, the work of domestic and foreign civil society organisations should be encouraged, supported and strengthened. Without being separate from a national comprehensive strategy, local efforts could be better tailored to community needs and cross-border issues. A dual-track approach appears to be the most viable strategy to effectively address post-revolutionary border dynamics and pave the way for long-standing stability in the Maghreb. 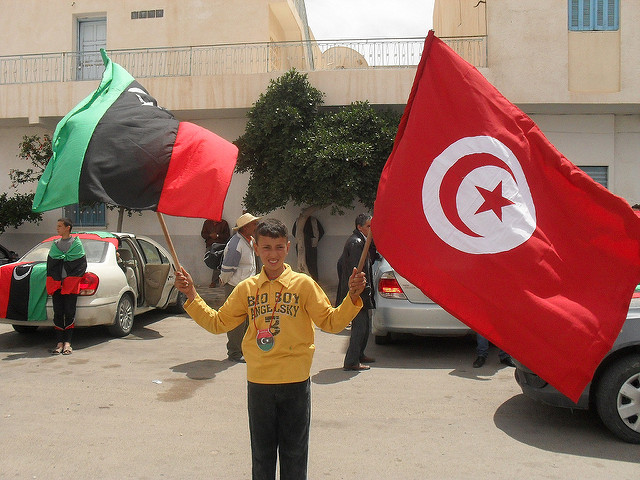 Image: A young Libyan boy raises the Tunisian and Free Libya flags in Tataouine, by Magharebia, posted on Flickr, licensed under CC BY 2.0

Recent trends on the smuggling of migrants through Libya

CCPCJ Side Event: Recent trends on the smuggling of migrants through Libya

The Changing Face of Organized Crime in the Sahel