Human smuggling from Africa to Europe

Jointly with the Institute for Security Studies, the Global Initiative published four papers and policy briefs as part of a research project on human smuggling from Africa to Europe, funded by the Hanns Seidel Foundation (HSF).

According to Europol, some 90% of irregular migration to Europe is ‘facilitated’ by smugglers or criminal groups who are paid to provide services such as transportation, fraudulent identification, bribes for border officials and settlement services. They exert influence on not only who moves, but also how, when and where people move. They also impact the safety and security of migrants along the journey, and the long term stability of the states through which they transit.

Our research team sat down with the smugglers themselves in Libya, Turkey, in the Sahel and in Sub-Saharan Africa to understand who are the smugglers behind Europe’s migration crisis, how they operate, what drew them into the trade, and how they are responding to international community efforts to end illicit migration.

Read our summarising pamphlet here: ISS & GI – Beyond Anecdotes: Getting to the heart of human smuggling

Breathing Space: The impact of the EU-Turkey deal on irregular migration

The €6billion agreement reached between the European Union (EU) and Turkey on migration achieved a dramatic drop in the number of crossings and stopped a fast-growing criminal industry in its tracks. But smugglers interviewed for this paper are watching closely for signs of a change of tack, and not without reason. The Erdogan administration has been progressively at odds with the EU as it ﬁnds itself hemmed in by growing internal dissent, multiple terror threats and a failing economy. The breathing space provided by the arrangement is running out and the EU does not seem to have a credible alternative in the event of a collapse.
Read it here: Global Initiative & ISS – Breathing Space (Nov 2016).

At the edge: Trends and routes of North African clandestine migrants

In 2015, over 16,000 Algerians, Tunisians and Moroccans were caught while attempting to migrate to Europe covertly. Though North Africans are a relatively small portion of the masses of clandestine migrants, they are a critical group to understand. They are the innovators and early adaptors of new methods and routes for migrant smuggling, such as their pioneering in the 1990s and 2000s of the routes across the Mediterranean that now fuel Europe’s migration crisis. Understanding how and why North Africans migrate, the routes they use, and how these are changing, offers insights into how clandestine migration methods and routes in general may shift in the coming years. In shaping better responses to actual dynamics, it is important for countries to proactively address the chronic conditions that drive forced migration before they generate social instability.
Read it here: Global Initiative & ISS – At the edge (Nov 2016).

Instability and high levels of violence in Libya preclude credible interventions to stem irregular migration ﬂows from off the coast of Libya to Europe. As a result, policy-makers have increasingly been looking to the transit country of Niger in order to reduce the number of migrants crossing into southern Libya for onward travel to Europe via the Mediterranean. In Niger, international attention, premised on the assumption that European interests are congruent with those of local actors, has concentrated on the city of Agadez, a smuggling hub in the Sahara Desert. Yet, vested interests related to migrant smuggling and the free ﬂow of people in Niger are misaligned with those of Europe, and the city of Agadez is in fact part of a broader system of ethnically derived zones of protection and control embedded in the political economy of the Sahel. Interventions designed to reduce migration ﬂows and enhance protection for the migrants must be predicated on a far more nuanced understanding of local dynamics and the non-state actors facilitating the trade, so as to avoid destabilising one of the few pockets of stability in an already volatile region. This paper draws from interviews with local communities and smugglers themselves along the Niger-Libya corridor.
Read it here: Global Initiative & ISS – The Niger-Libya corridor (Nov 2016). 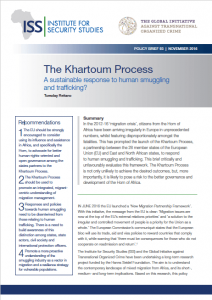 In the 2012-16 ‘migration crisis’, citizens from the Horn of Africa have been arriving irregularly in Europe in unprecedented numbers, whilst featuring disproportionately amongst the fatalities. This has prompted the launch of the Khartoum Process, a partnership between the 28 member states of the European Union (EU) and East and North African states, to respond to human smuggling and trafﬁcking. This brief critically and unfavourably evaluates this framework. The Khartoum Process is not only unlikely to achieve the desired outcomes, but, more importantly, it is likely to pose a risk to the better governance and development of the Horn of Africa.
Read it here: Global Initiative & ISS – The Khartoum process (Nov 2016).

All four papers were presented by the Global Initiative, ISS and the authors in the event “Dynamic Markets – Human Smuggling from Africa to Europe” in Geneva on December 8th.  Watch the video here.

For further information on the research series and individual papers, please contact Tuesday Reitano of the Global Initiative Secretariat (tuesday.reitano@globalinitiative.net).

Global Study on Smuggling of Migrants

Migrant smuggling in the EU

The Khartoum Process – A sustainable response to human smuggling and trafficking