The 14th United Nations Congress on Crime Prevention and Criminal Justice kicks off on 7 March 2021 in Kyoto and is set to adopt its outcome document titled the ‘Declaration on advancing crime prevention, criminal justice and the rule of law: Towards the achievement of the 2030 Agenda for Sustainable Development’. The declaration has already been agreed by diplomats at the UN in Vienna without civil society input, which is reflected in the state-centric approach outlined in the declaration.

In line with the Congress’s theme of advancing the UN’s Agenda 2030 through crime prevention and criminal justice, the Kyoto Declaration does reflect progress in the way organized crime is understood as a blocker and disruptor of sustainable development. However, it does not align that understanding with innovative or holistic approaches, instead cementing a focus on law enforcement and criminal justice, and assigning states the role of lead responders[1]. At the multilateral level, the document also sticks to familiar positions placing the United Nations Office on Drugs and Crime (UNODC) and its policy fora at the centre of the response rather than prioritizing interagency and cross-UN cooperation.

It outlines a range of threats and reaffirms existing and manifold law enforcement and criminal justice responses. It does not, however, provide a strategic vision of how the international community could respond in a more holistic and whole-of-society way. This is not surprising, as the negotiation and preparatory process was largely closed to civil society.

‘Civil society’ can initially seem a broad and quite opaque term, but it involves an incredibly diverse range of organizations, including academia, community groups, NGOs, labour unions, indigenous groups, charitable organizations, faith-based organizations, professional associations and foundations, and advocacy groups. This broad spectrum offers a variety of experiences, expertise, contexts and viewpoints. Civil society working on organized crime issues could include everyone from multinational companies, to religious leaders in violent communities, to volunteers who run refuges for victims of crime.  Based on that, we cannot expect civil society to offer a united view on crime or on how to improve the international response, but all of these groups can offer something that adds value to states’ understanding and interpretation of the situation they are facing on crime prevention and criminal justice issues. Civil society partnership and consultation should therefore be a pre-requisite for any truly comprehensive strategy on crime and justice.

But the Kyoto Declaration represents an enhanced focus on state responses. It conceptualizes law enforcement and criminal justice as the ‘central components of the rule of law’, and affirms the ‘primary role and responsibility’ of states and governments to implement responses. The role of civil society is consequently sidelined and mentioned only in reference to the establishment of partnerships with the state, ‘as appropriate’.

This is unfortunate, as civil society has long been recognized as having an integral role to play in criminal justice and crime prevention efforts. During the 1985 Crime Congress in Milan, participants agreed that non-governmental organizations ‘should continue to be effectively involved in the work of the United Nations’, in line with the recommendation of an active participation from the community established in the 1995 Congress in Cairo and the role of NGOs as ‘partners and actors’ that was agreed in Vienna in 2000.

However, this voiced support for civil society has gradually been watered down. In 2005, the Bangkok Congress began to limit its role, highlighting that cooperation should be encouraged with the unnecessary caveat ‘within the rule of law’. And by 2015, at the Doha Crime Congress, it had become clear that the agreed and understood role of civil society was weakening, in comparison to previous declarations.

The Kyoto Declaration continues this trend and is markedly more state centric, with civil society relegated to a supporting but clearly secondary and conditional role. And this gradual weakening of support for civil society has taken place while the criminal underworld has gained strength. If there were ever a time to argue for more whole-of-society responses to the growing and damaging phenomenon of organized crime, it is surely now.

A state-led process that endorses a state-led response

The Declaration negotiation process followed the model of the 2015 Doha Congress, where the declaration was agreed by member states before the congress actually began. This means that there was minimal inclusion of civil society or other external inputs in the negotiation process, despite the congress’s UN-derived mandate stipulating that the declaration should be based on the discussions at the congress, which is a forum for exchange between states, civil society, intergovernmental organizations and individual experts.

The Kyoto Declaration was agreed to during a period of negotiation by diplomats in Vienna, chaired by the Japanese Permanent Representative to the UNODC. The process began with a series of regional preparatory meetings to discuss substantive issues on the Congress agenda. Few non-governmental organizations attended these meetings and awareness of these meetings and the process among the diverse civil society community was low.  At two of the meetings, in Bangkok and Santiago, only one NGO attended. This is particularly significant given the number and vibrancy of civil society organizations working on crime and justice issues in these regions. 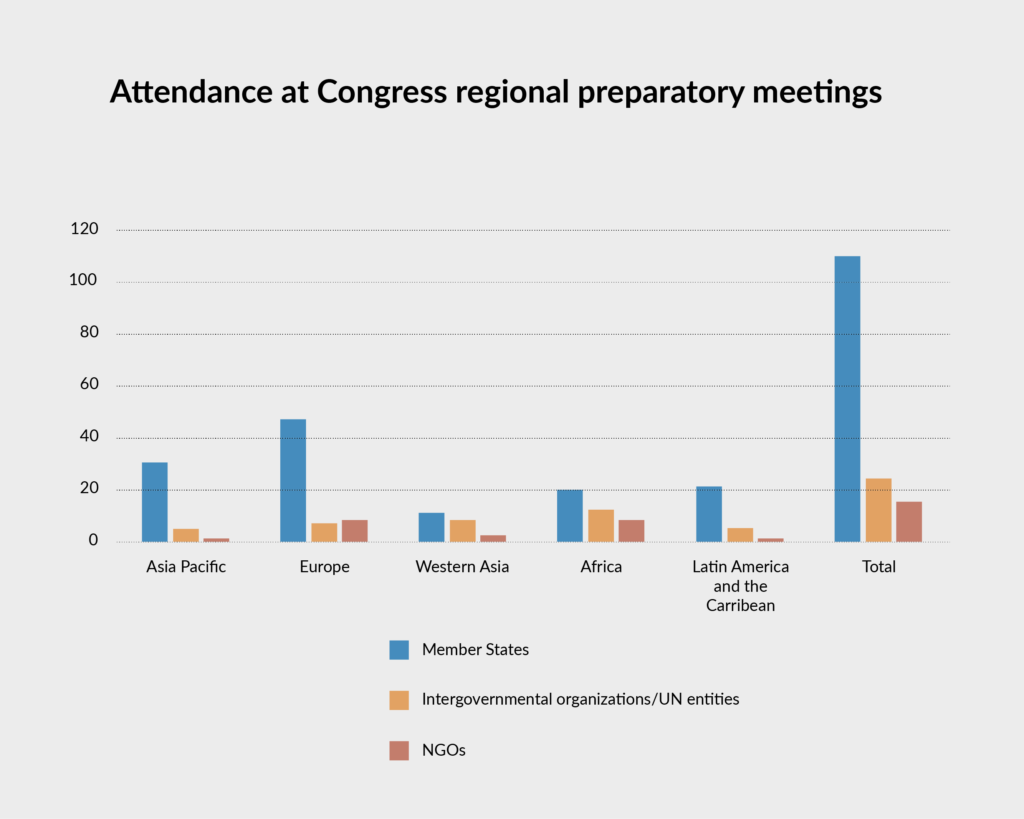 The reports of these regional meetings were used by the Congress hosts to inform the first draft of the Declaration. The negotiations on subsequent drafts were conducted solely by member states, with no forum for external consultation. The May 2020 session of the Commission on Crime Prevention and Criminal Justice (CCPCJ), which acts as the organizing body for the Congress, was cancelled owing to the COVID-19 crisis, meaning another opportunity for engagement with civil society was forfeited. 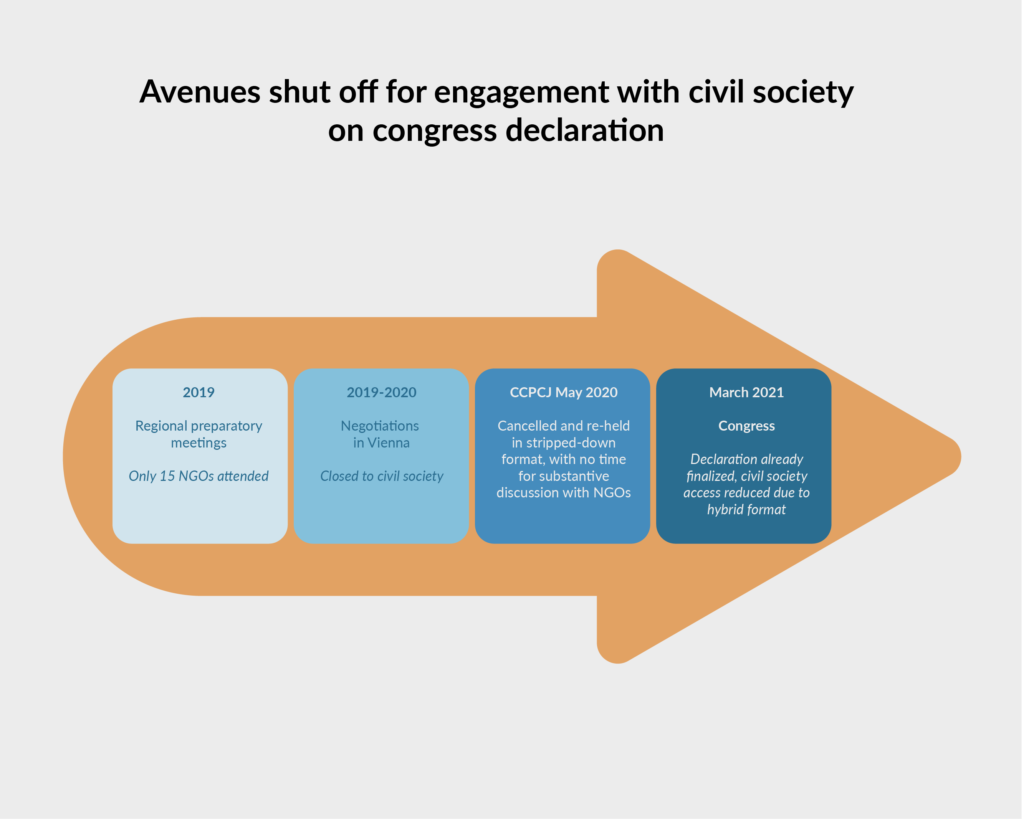 This state-centred process produced a result in good time ahead of the Congress, which is convenient for the diplomats and UN officials involved. But it is not in line with how Congress declarations should be negotiated – as an outcome of the discussions between states and civil society at the Congress itself. It is regrettable that there was no meaningful platform or mechanism to consult with or engage civil society voices in the formulation of the Declaration.

The Declaration does commit to strengthen global partnerships by engaging with stakeholders. But the message of state dominance and the lack of references to communities and civil society throughout does not bode well for how civic space will be involved or consulted in the follow-up to this declaration. In this one important respect, both the Kyoto Declaration and the process that produced it, represent a step backward.

[1] Article 7bis: “We emphasise our primary role and responsibility as States and Governments for defining crime prevention strategies and policies”

Kyoto Declaration on Advancing Crime Prevention, Criminal Justice and the Rule of Law: towards the achievement of the 2030 Agenda for Sustainable Development

Engaging with the UNTOC Review Mechanism: An overview for civil society

When the peacekeepers are part of the problem