On 2 June 2015 in The Hague, the Global Initiative and the Hague Institute for Global Justice convened an Expert Roundtable and Panel Discussion on Countering Human Trafficking through the United Nations Guiding Principles on Business and Human Rights (“Ruggie”-principles). The events were co-organized with ABN Amro, Global March Against Child Labour, and the Bureau of the National Rapporteur on Trafficking in Human Beings and Sexual Violence against Children.

The main question for the panel discussion was whether the Ruggie-principles are one of the most promising, newer means to combat human trafficking thanks to the “privatization” of anti-trafficking efforts by corporations alone and in public-private partnerships. Ms. Ieke de Vries, Researcher, Bureau of the National Rapporteur on Trafficking in Human Beings and Sexual Violence against Children, moderated the debate with the five panel members and the audience.

Mr. Frans Röselaers, Board Member and Trustee of the Global March against Child Labour, commented on the difficult process of forging and maintaining multi-stakeholder partnerships to counter human trafficking. He explained that many of the lessons learned in this process of the Global March have found their way into the Ruggie-principles. Furthermore, he pointed out that when dealing with human trafficking, it is important for NGOs to have a network of “allies” on the ground which deal with identified cases of human trafficking, such as the police, labor inspectors, and the judiciary.

Ms. Livia Wagner, Private Sector Advisor of Global Initiative Against Transnational Organized Crime, explained that the Ruggie-principles set out ways in which the private sector can take anti-trafficking responsibility. However, she opined that the bar for anti-trafficking efforts is set far too low and that their non-binding nature hinders effective action. She suggested that the roles of states and the private sector should not be as separated as in the Ruggie-principles. Therefore, she proposed for Europe legislation modelled after the UK Slavery Bill and the California Transparency in Supply Chain Act 2010. The private sector, such as technology and transportation companies, also has a role to play in setting up specialized training programs. 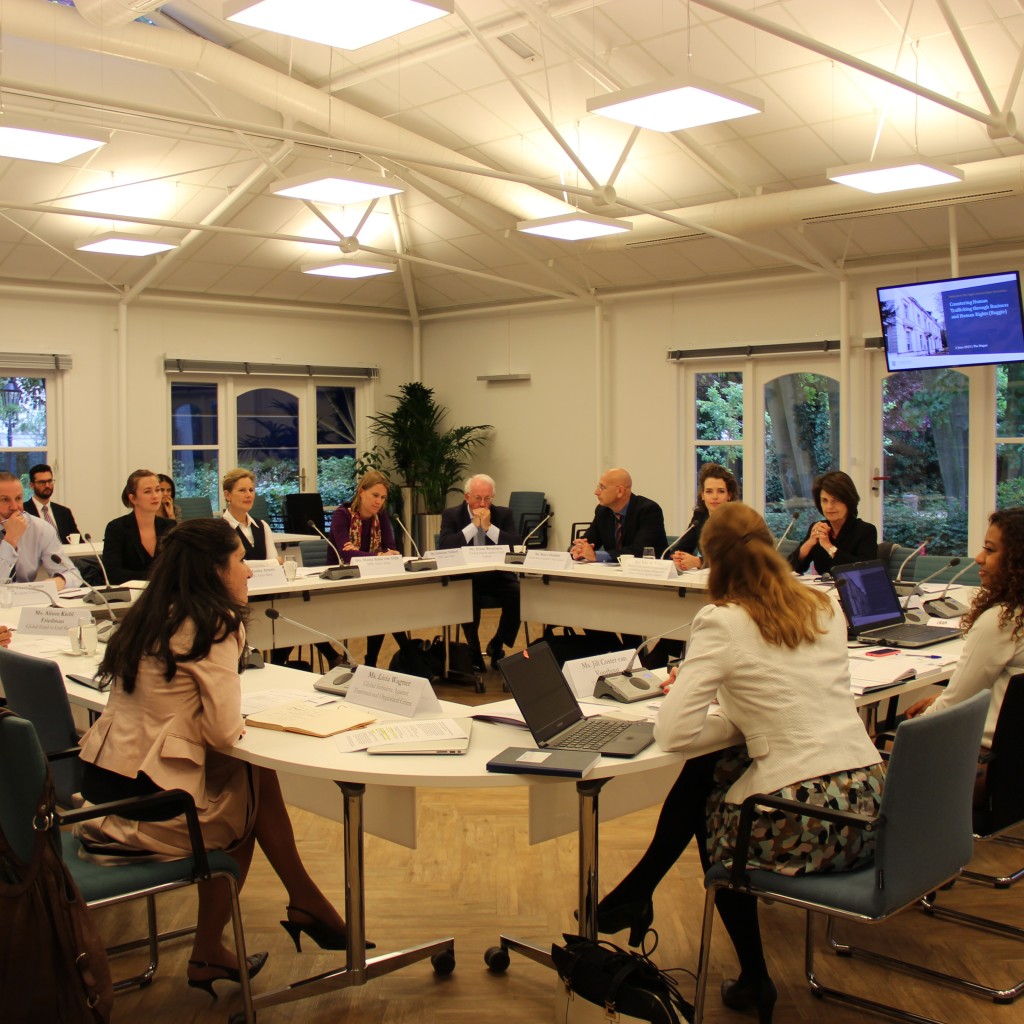 Mr. Peter Barnes, Director Europe of Western Union Global Investigations, highlighted that three factors drive corporations to take action on human trafficking: strong leadership within the corporation, regulatory pressure from governments, and social pressure from the public. Because human trafficking is driven by profit, financial institutions can help to trace related financial transactions. By using information on named individuals, financial institutions have been able to trace entire webs of individuals involved in trafficking. Patterns in past cases have been used, moreover, to detect similar patterns in future transactions, as well as for training of agents who can spot financial “red flags”.

Ms. Alison Kiehl Friedman, Vice President of the Global Fund to End Slavery, mentioned the lack of equality in the fight against trafficking. The profits made in trafficking are exponentially larger than anti-trafficking funds. Therefore, it is helpful that private sector responsibility “frees up” procurement finance to tackle human trafficking in supply and value chains. The 2010 Californian Act can be used as a model to encourage the private sector to make their chains trafficking-free. However, she submitted that replicating similar legislation in other parts of the world would be of limited value. The Californian Act already covers the majority of multi-national corporations and compliance has not always ensured actual anti-trafficking action, she argued.

Ms. Petya Nestorova, Executive Secretary of the Council of Europe Convention on Action against Trafficking in Human Beings, explained that monitoring under this Convention has identified some pockets of good practice. However, most states argue there is private sector opposition to any real action, such as more rigorous legislation or enforcement. In addition, effective anti-trafficking measures will have to address the root causes of trafficking, and particularly states will have to do more in that respect. Codes of conduct that encourage anti-trafficking are valuable, but require state enforcement and supervision. Government’s incentives to businesses that combat human trafficking are of added value, she stated.

The discussion continued the Global Initiative’s efforts to strengthen private sector responses to human trafficking, strengthen their supply chains and reinforce the integrity of their operations, including through the series of webinars, “Private Sector Responses to Emerging Challenges Webinars“.

Webinar: Awareness Raising and Campaigning: What and How Does Social Media Contribute to Identification and Responses?