Pragmatism versus ideology in countering poaching and wildlife trafficking

Over the past decade, poaching and wildlife trafficking have devastated wildlife populations around the world. Environmental threats, such as climate change, deforestation and other forms of habitat destruction, have also had a large-scale impact on ecosystems. Given the combined effect of these threats, poaching and wildlife trafficking – not to mention badly managed legal trade in wildlife – have the potential to drive species to extinction.

Managing wildlife trade effectively and curbing its illegal dimension are needed to preserve species and conserve biodiversity. And this is not just about saving iconic megafauna, such as tigers and elephants, but also those species that less frequently capture our attention, such as reptiles, frogs and insects. Poaching and wildlife trafficking often elicit high-profile and intense emotions. Yet how to respond effectively often eludes policymakers, and the effectiveness of policy responses has been highly inconsistent.

In my book The Extinction Market: Wildlife Trafficking and How to Counter It, I explore the complexities of policies for dealing with the poaching and wildlife trafficking crisis. I assess the effectiveness of five policy tools:

The first three tools correspond to broader conservation schools of thought. I also compare and contrast the illegal wildlife economy with the illegal drug trade, and draw lessons and warnings from counter-narcotics efforts that can be used to inform appropriate policies to address poaching and wildlife trafficking.

The biggest challenge is that each of these five policy tools comes with severe limitations and downsides, and none of the three schools of thought consistently performs better than the others. In fact, for each conservation school of thought and each policy tool, there are as many failures as successes – in fact, often more failures. This means that policy effectiveness is highly context-specific, and local cultural and institutional settings, as well as species’ characteristics, influence policy effectiveness. Among factors that influence policy effectiveness are the pervasiveness of corruption; property rights; strength, cohesion, and empowerment of local communities; as well as cultural mores and beliefs. Among the biological characteristics of species that impact on the effectiveness of policy design are the species’ reproduction rate and whether it is easy to breed in captivity.

The fact that policy outcomes vary so much, and because a one-policy shoe does not fit all, is deeply problematic for the proponents of the three schools – i.e. those calling for bans on hunting and trade, and increased law enforcement (a stance adopted by many environmental NGOs); those who advocate maximizing legal trade and economic incentives for conservation; and those who lobby for the involvement of local communities as the most appropriate vectors of conservation.

This lack of certainty as to which policy tool or approach works best under what circumstances is in striking contrast to the cumulative knowledge gained about the effectiveness of counter-narcotics policies. In the drugs field, we know much more: we know under what circumstances eradication can suppress cultivation in a particular place, and that for eradication to have any success the conflict must have ended first. We know how to design alternative livelihood policies to enhance their effectiveness. We know how to police gangs and retail markets to reduce their proclivity towards violence, and understand where and why particular strategies work or don’t work.[6] We know how to design interdiction strategies and understand the profound limits of their effectiveness in eliminating supply, and which are the best objectives (such as violence reduction) around which to design interdiction strategies.

We also have enough evidence of what doesn’t work in drug control – for example, that arresting users and non-violent low-level dealers does not reduce drug consumption and that it is socially catastrophic for users, their families and communities. And we know that harm-reduction approaches, such as safe needle exchange, methadone maintenance and the widespread availability of overdose reducing medications, such as naloxone, save lives. In the drug policy field, local cultural and institutional settings may well influence policy effectiveness, but the general lessons carry rather well. The challenge in dealing with the illegal drugs is to persuade policymakers not to cling to doctrines and ideologies, but to adopt policies pragmatically on the basis of evidence. There is also much we don’t know about drugs and where our knowledge needs to improve dramatically, such as how to develop better treatment strategies towards addiction and strengthen prevention approaches.

By contrast, the conservation community does not yet know which policy school of thought works consistently better and under which particular circumstances. This is deeply concerning because locking in a response, particularly a global one, can produce unsatisfactory or even counterproductive effects. And interventions can be hard to reverse. Policy is like toothpaste: once you squeeze it out of the tube, it’s hard to get it back in. Advocacy groups and vested interests lobby around certain policies and promote them despite evidence of their limited effectiveness or negative side effects. Moreover, unlike production of illegal drugs, wildlife is depletable, so adopting ineffective policies is extremely costly, as species can go extinct and biodiversity collapse very rapidly. The time pressure to get policy right in the field of wildlife conservation is therefore urgent. And yet the effectiveness of policy is highly contingent and context-specific.

Nevertheless, despite these challenges, some overarching findings and policy guidelines can be drawn (I present these in more detail in The Extinction Market):

Given the increasing threat that wildlife trafficking poses to the survival of vulnerable species and the current scale of elephant poaching, mainland China and Hong Kong need to complement their announced prohibition of ivory markets with diligent enforcement measures and start shutting down all illegal wildlife retail markets. Other countries, such as Japan, should also ban their ivory markets and strengthen enforcement. South Africa and other countries should not be given licences to sell ivory or rhino horn until both demand and poaching significantly decline, and better monitoring and enforcement structures are in place in supply and demand countries.

Allowing sustainable hunting, even of endangered species – such as for trophy hunting – should be the policy predisposition, so that local stakeholders have material interests in promoting conservation – as long as strict monitoring and controls can be put in place. However, when levels of corruption, law evasion and the laundering of wildlife are pervasive, policymakers need to be willing to move to temporary and area-specific bans, and sometimes even outright global blanket bans, for specific species. Hunting can be sustainable and can benefit the environment by keeping overpopulated species in check. This is particularly so if the numbers of keystone predator species are down, whether as a result of poaching, habitat destruction or other causes. But poaching and unsustainable hunting of apex predators are particularly problematic, as these have large-scale repercussions throughout an ecosystem.

Not all poaching, just as not all legal trade, threatens a species’ survival and health. Therefore, in buffer zones and even in core parts of protected areas, it makes good sense to allow limited hunting of non-endangered species and the limited sustainable extraction of natural resources to mitigate food insecurity and income losses within poor local communities.

It is crucial to make a case-by-case assessment of what type of hunting is sustainable at what levels. Careful monitoring and reassessments need to be conducted regularly and repeatedly to establish whether wildlife populations and ecosystems are bearing up well, as the impact of limited exploitation may change over time.

Whenever possible, local communities should be given rights to land in conservation areas and to proceeds from sustainable wildlife utilization. Marginalized communities should receive assistance to secure their rights and should have a strong voice in the determination of land use and protection to achieve environmental equity and sustainability. The rights conferred should be limited, with restrictions applied on use to ensure the preservation of biodiversity: communities should not be allowed to destroy valuable biodiversity areas. But this does not preclude sustainable logging or the hunting of non-endangered species – either for subsistence or trophy hunting – or rights to limited grazing in protected areas.

Conditional rights should also include the community’s entitlement to 100 per cent of the revenues derived from sustainable wildlife management. However, this revenue should be taxed. That way, government support for local community efforts can be established, and the state may be less incentivized to collude in external poaching and deforestation or leave the community high and dry when other actors, such as wildlife traffickers or the logging industry, threaten its resources. All such arrangements need to be monitored and reassessed on a regular basis, with input from local communities.

If allowing the exploitation of environmentally significant areas by local communities results in significant degradation of natural ecosystems, then consultative and compensated resettlement may well be necessary. At a minimum, compensation must ensure that the community is economically no worse off than when it lived in the protected area and, ideally, the level of compensation will also reduce poverty. That means, however, that proponents of exclusive protected areas must help raise money to offset the consequence of resettlement or placing restrictions on land use.

Conditional cash transfers should become a standard element of the policy conservation toolbox, particularly in circumstances where legal trade in a species is not viable and where ecotourism or alternative livelihoods cannot generate enough resources to offset the benefits forgone by local communities (for example, had they converted natural ecosystems, such as forests, into agricultural land or been able to hunt threatened species).

Effective monitoring and law enforcement are crucial for the success of any of the tools.  Strengthening law enforcement regarding wildlife and reducing corruption among its agencies are critical.

Increasing penalties for poaching and wildlife trafficking also makes sense – but only up to a point. Sentencing poor, low-level poachers and trackers to lengthy prison terms or imposing financial penalties that drive their families deeper into poverty becomes counterproductive and undermines the legitimacy of wildlife conservation policies. As the war on drugs teaches us, such approaches do not deter violations, but they do provoke a popular backlash against policy, as well as being morally questionable.

Human-rights abuses by law-enforcement authorities should never be tolerated, and ineffective and reprehensible policies, such as shoot-to-kill and shoot-on-sight, should not be adopted.  In situ law enforcement (i.e. in areas where protected animals occur) is by far the most effective tool in the attempt to neutralize and prevent poaching.

Dismantling wildlife-trafficking networks should focus on apprehending as much of their middle operational layers – in one sweep to minimize their regeneration capacities. This is far more effective than arresting wildlife kingpins – as morally desirable as that may be – or flooding prisons with low-level poachers. But interdiction needs to be carefully designed so as not to produce the counterproductive effect of greater seizures leading to greater poaching. That is why in situ law enforcement and targeting of middlemen, as opposed to en route seizures, are so important.

Retail and demand markets need to be reshaped – through persuasion, messaging and enforcement. Messaging should not focus on altruism, but on immediate material and personal threats to users. Enforcement penalties should differentiate between large-scale illegal wildlife speculators and heavy users of prohibited wildlife products (for whom lengthy sentences should be applied) and small-level buyers (for example, of an ivory statue), who should receive mild and swift punishments, such as placement on public shaming lists or short sentences of public work.

Finally, emotionalism and ideological commitment should not cloud judgements about policy efficacy. Policy should be based on a pragmatic assessment of what keeps wildlife population numbers up and preserves ecosystems – even if some feel uncomfortable about certain policies, such as permitting trophy hunting. However, minimizing harm, including unnecessary cruelty to animals or humans, should always be an essential standard in deliberations over the choice of conservation policies. 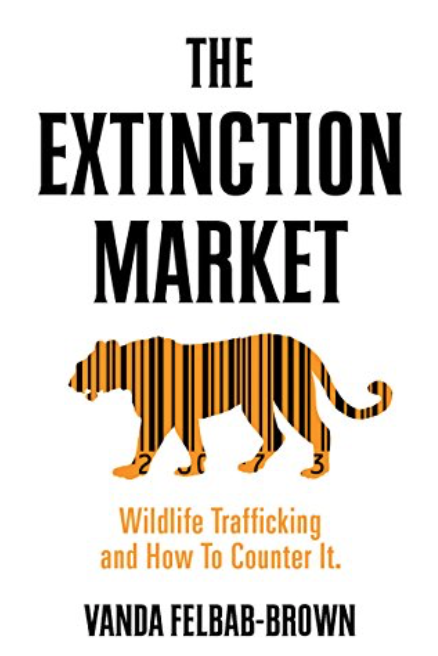 Transnational Organised Crime and the War on Rhino Poaching

Organized Environmental Crime: Act now or we will lose…