Catalyzing the Building Blocks of a Global Strategy

The Global Initiative is an independent civil-society organization, headquartered in Geneva, Switzerland, with a globally dispersed Secretariat and a high-level advisory board.

Its network members include prominent law-enforcement, governance and development practitioners who are dedicated to seeking new and innovative strategies and responses to organized crime.

The Global Initiative was born from a series of high-level, off the record discussions between mainly (though not exclusively) law-enforcement officials from both developed and developing countries in New York in 2011–12. At these meetings, the founding members of the Global Initiative, many of whom stand at the front line of the fight against organized crime, illicit trafficking and trade, concluded that the problem and its impacts are not well analyzed; they are not systematically integrated into national plans or strategies; existing multilateral tools are not structured to facilitate a response; and existing forms of cooperation tend to be bilateral, slow and restricted to a limited number of like-minded states.

The result was the creation of the Global Initiative against Transnational Organized Crime, which provides a platform to promote greater debate and innovative approaches, which serve as the building blocks to an inclusive global strategy against organized crime.

Within less than a decade, the GI-TOC has developed from being a lean start-up to a global organization.

The aim of this strategy is to consolidate that rapid growth, and to guide and inform the next phase of development in a way that demonstrates how the organization has become a truly global initiative. Therefore, the theme for this strategy period is to ‘go global’. Our aim is to ensure that, by 2023, the GI-TOC:

5 – The future: consolidate a decade of growth and position the organization for the future

This strategy will position the GI-TOC, as it enters its second decade, as the leading global civil society organization dealing with transnational organized crime and improve its capacity to catalyze more effective responses to this global problem.

Consistent with the aim to go global, and with one of the original objectives of the GI-TOC in mind, this strategy will continue to work towards putting in place the building blocks for a global strategy against organized crime.

The year 2023 marks the 10th anniversary of the founding of the GI-TOC and 20 years since the ratification of the United Nations Convention against Transnational Organized Crime.

The anniversary year will be an opportunity to build upon the GI-TOC’s first decade and its role in contributing to reducing the global harms caused by organized crime, and to plan for the future.

The GI-TOC has developed a regional network of civil society actors to work together against organized crime.

The work of these observatories exposes more fully the extent and harms caused by organized crime, illicit trade and corruption, and is designed to bolster state and non-state actors committed to achieving an effective response. Rather than regional offices, these observatories should be considered nodes in a network: clusters where like-minded crime analysts and activists come together to collect, share and analyze data, and take part in dialogue about the ‘hidden economy’ and the impact of organized crime. The observatories provide a unique platform for engagement with states and for dialogue and joint action between civil society, law enforcement and other state actors.

Currently, the GI-TOC has five organized-crime observatories and allied networks against organized crime at both country and regional level that focus on the priorities of that region: 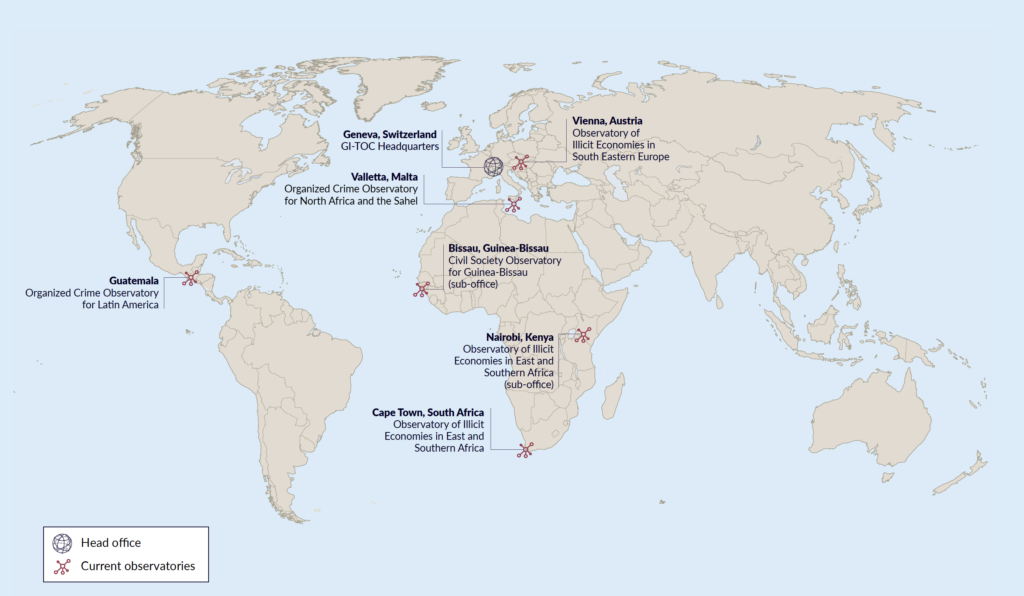