What does Black Lives Matter tell us about tackling organized crime?

The dual law of technology in trafficking

What happens in America often reverberates globally. The complex global emergency of COVID-19 has now met waves of uprising around anti-racism, inequality and the systems that perpetuate them.

Many policing tactics deployed in communities around the world derive from policy responses to curb illicit markets. Some of the most persistent and militarized responses in communities are predicated upon fighting transnational organized crime. And these often occur in communities of colour, immigrant neighbourhoods, and marginalized and lower-income areas.

These current debates about power, use of force and inequality provide a lens to examine responses to transnational organized crime. This brief uses the concept of illicit markets to examine organized crime as the systems and actors that make up these markets, including the government responses to them. Transnational illicit markets, such as the illicit drug or wildlife trade, connect a wide range of actors – from farmers and fishermen to hitmen and cartel bosses. Organized criminal groups, the most common manifestation of how organized crime is carried out, include cartels, armed militias and gangs. But they can also include members of political parties, corporations, businesses and local governments. By looking at the markets more broadly and then identifying where responses are targeted, one can see how transnational organized-crime responses create their own logic of power and exclusion, and are deployed to manage communities.

This policy brief begins by discussing the current US context of BLM protests, then situates the debate within the transnational organized-crime agenda, and addresses the implications for responses that align with calls for social and economic justice. 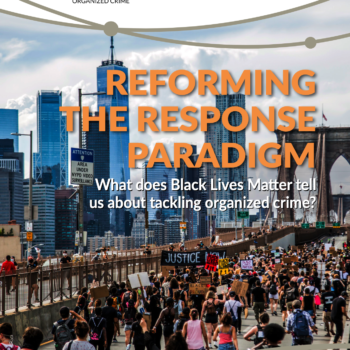 Reforming the response paradigm - What does Black Lives Matter tell us about tackling organized crime?

Summer Walker is a Senior Analyst and New York Representative at the Global Initiative Against Transnational Organized Crime. She has worked in New York and Berlin for international NGOs, development agencies and research institutes, and has published papers on drug policy, human trafficking, and organized crime. Prior to this, she worked at United Nations University in New York, running a drug policy project. Ms. Walker’s wider background is in human rights and development, and she explores the impacts of organized crime and associated responses in these areas.