The hotspot that we profile in this issue does not have many of the characteristics of the usual locations that we look at, namely socio-economic vulnerability, a strategic location along trafficking routes or weak governance. Rather, Jahorina and its famous ski resort is a popular destination near Sarajevo, making it a magnet for criminals on holiday as well as for corrupt officials looking for a profit. 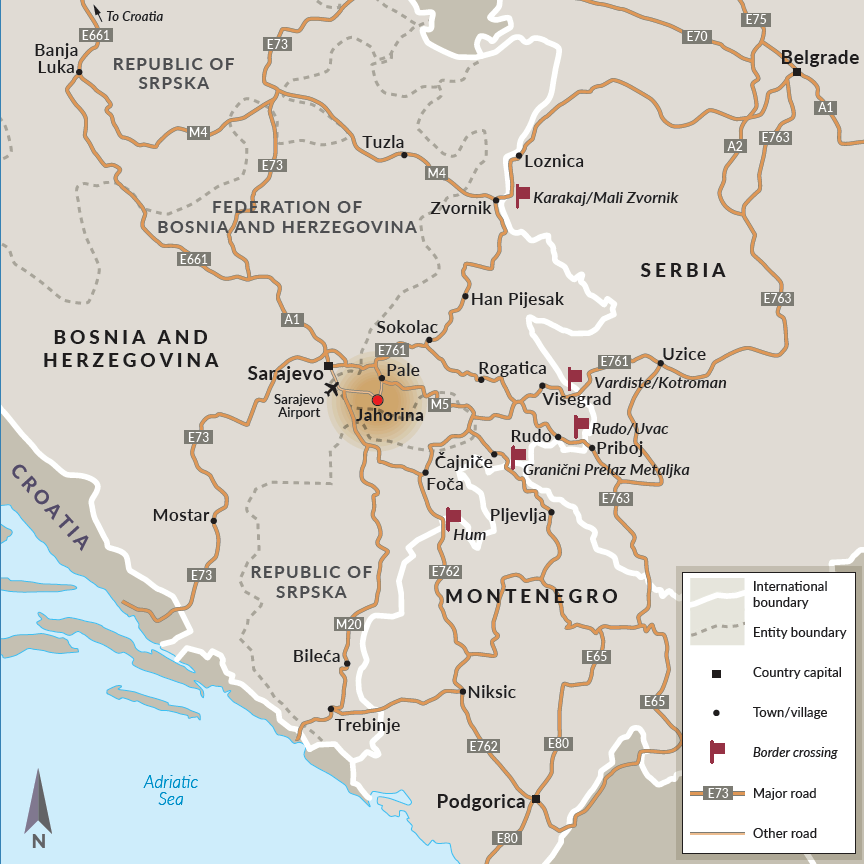 1. Shadow of the mountain: organized crime around the Jahorina winter resort

The ski resort at Jahorina, close to Sarajevo, was busy during the winter of 2020–2021 despite the COVID-19 pandemic. The mountain is famous as the location of the 1984 Winter Olympic Games. In the 1990s, after the war in Bosnia and Herzegovina, the Jahorina region suffered from underdevelopment and was known as a criminal hideout. Today, it is a place where high-profile criminals spend their time and where corrupt officials want to invest or launder their money. This article looks at the reasons why Jahorina has become an unlikely hotspot of organized crime and corruption.

Cocaine goes ‘bananas’ on the Adriatic coast. A number of major drug busts in Croatia and Albania over the past few months shows that there is a tsunami of cocaine coming through Adriatic ports. Most of the drugs are hidden in containers transporting bananas from Latin America to Europe. While cocaine consumption in the Western Balkans is relatively low, these seizures – as well as past trends – show that ports in Albania, Croatia and Montenegro are important entry points for the cocaine pipeline into Europe. Major seizures may indicate more effective law enforcement, but they may also be a sign that the so-called ‘protection economy’ that enables drug trafficking is being disrupted. This article looks at a recent spate of big seizures and considers what could be behind them.

As more people go online for communicating, shopping and searching for information, they also become targets for predatory and criminal behaviour. This trend has accelerated during the COVID-19 crisis, with young people being particularly vulnerable. In late January 2021, police in North Macedonia broke up a group of more than 7 000 people who were using the Telegram messaging app to share explicit pictures and videos of women and girls. This is the second time in two years that the group has been taken down. Similar cases were also reported in Serbia in March, when several offenders were arrested for sharing child abuse material. As discussed in this article, such cases show the growing dangers of tech-facilitated crime, including cyberbullying, sexual exploitation and sextortion in the Western Balkans, and the challenges faced by law enforcement.

In recent years, Greece has become a theatre for a wide range of illicit activities carried out by criminal groups from the Western Balkans. Its ports and proximity to the Western Balkans make it an attractive entry point for the smuggling of cocaine, while it is also a market and transit country for cannabis smuggled from Albania. Since 2015, it has also been a key gateway for the smuggling of migrants, particularly into North Macedonia and Albania. This article shows that Greece is a further example of how the transnational tentacles of crime spread out from the Western Balkans around the world.

5. Unburying guns from Albania’s past

In April 2021, police in Albania made two major seizures of weapons in the capital, Tirana. Most of the weapons date from when the arsenals were looted during civil unrest in the country in 1997. It is believed that the vast majority of killings related to organized crime that have taken place in Albania since 1997 have been carried out using guns stolen from the old arsenals. This article looks at the legacy of that problem and what the Albanian government is doing about it.

More than 20 years after the war in Kosovo, Mitrovica continues to be a divided city with a Kosovo-Albanian community located in the southern part and a Kosovo-Serbian community in the northern part of the city, separated by the Ibar river. Tensions between the communities remain and rule of law is weak. As a result, the region continues to have a reputation as being a haven for organized crime. Community Building Mitrovica is a civil society organization that works with young people in the city to increase their resilience to organized crime. In our regular series of profiling the work of such organizations, we talk to two leaders of the initiative.